Rebuilding the Ravens - Redactions and Revenge

Fledglings of Silver - Rebuilding the Ravens

This is your last chance to change your character around, without doing ingame things.
So if you want to swap some ability scores, or move some skill points around. maybe change a feat. Now is the time to do it. Any change that doesn’t modify your core character concept should be fine.

The characters join others in the early morning to protest the paracount and his proclamations at the northern end of Aria Park. As the hours pass, Vachss and Brandon’s character spend much of their time taking advantage of the crowd, by losing some purses. Vachss notices that there is a unusual subcurrent in the crowd, as if there was someone organizing it, but fails to find them. Joe’s character spends his time first organizing the crowd, before suppressing the Chelish Loyalists with various methods, including blade hands and riding people(!?). Bryce’s character spends her time rabble rousing. She starts out strong but fades before moving towards Joe’s character and gaining recognition from the crowd in that area. 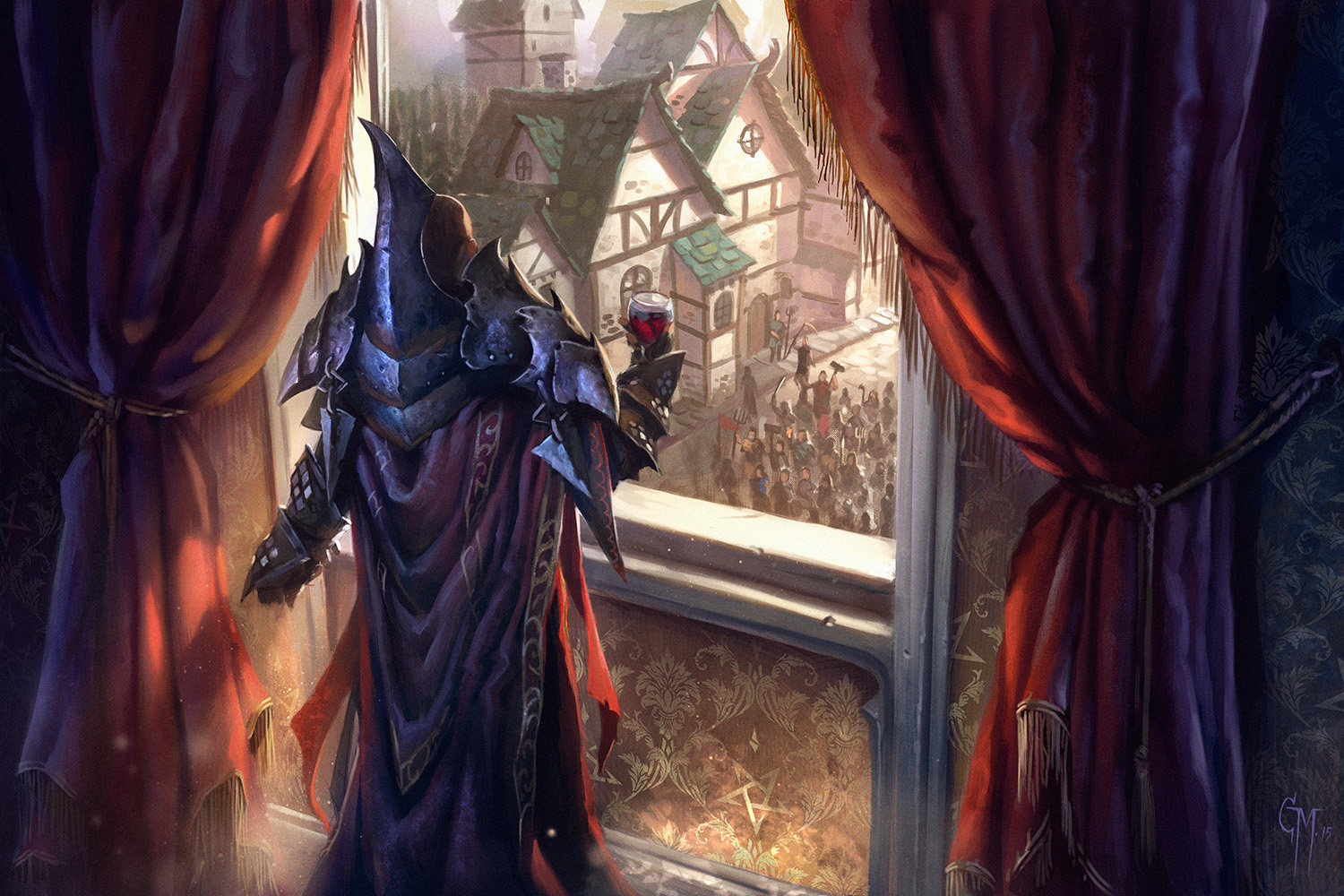 Finally, after three hours, Paracount Barzillai Thrune makes an appearance and announces his eighth Proclamation.
“Ah, my adoring little chickadees. I am sorry to say I have not yet adapted to your quaint, country ways, being accustomed as I am to the sophistication and learning of Egorian. Nonetheless, know I have heard your concerns, and that I appreciate your valued feedback, and I know we shall eventually find a mutual understanding in the fullness of time. I take pride in updating Kintargo’s quaint, outdated laws to the modern standards the city deserves, and strengthening its ties with the empire in these cruel times, but obviously I have approached my duties too aggressively.

You say you chafe at the presence of non-natives in positions of power? That authorities not of this city have no place as its leaders? That you will not be yoked by intruders? Your lord-mayor hears you. And so it is with a heavy heart that I issue this proclamation, in response to your demands: all ships’ captains are hereafter barred from leaving their vessels and setting foot on Kintargo docks or streets, under pain of… let’s say… squassation!”

His proclamation starts a riot, after a few moments someone throws a handful of manure at Barzillai . His expression changes from amused to bellicose and yells, “Enough of this! Nox, run them off, arrest them, or kill them. I don’t care which!”

At that moment, the Chelish Citizens’ Group(CCG), that had been hiding in the crowd, throws off their cloaks and begins to attack people to capture them. Someone throws a dagger at Nox, hitting her in the throat. The four of the CCG attack the characters. Nox quickly pulls out the dagger and her neck seems to heal itself before she moves into the opera house.

Chaos ensues and the player characters manage to quickly take down two of the CCG befor Vachss and Bryce’s character fall due to subdual damage. Someone in the crowd quickly uses healing potions on them before two of the Dottari, the city guard, join the fray. After just over half a minute The party manages to group up and defeat the immediate threat. Nox than choses to make her reappearance along with twelve more Dottari. The party makes a quick escape.

A new friend in need

As the party makes their escape, Joe’s character hears the sound of battle coming from a nearby ally. They find a man in a losing fight against nine members of the CCG, four of them already down. The party quickly interjects quickly defeating three more before the remaining two members escape. The man thanks them while drinking a healing potion and suggests they move to a safer location to talk.

He leads them to the backroom of Crissali’s fine Tomes and introduces himself.

“Thank you again for that timely rescue. Truth is, our meeting was no coincidence. I followed you from the protest earlier today, but in the panic that erupted I lost track of your group. You proved yourselves to be people of uncommon skill, and I am a man of uncommon needs."

“My name is Rexus Victocora, and until last week’s Night of Ashes, I was one of this city’s nobles. My parents’ estate burned to the ground that night—I escaped simply because I was studying at the Alabaster Academy during the fire. There were other fires that night, as you know—fires that many believe were started by Barzillai Thrune or his agents in an attempt to squash any spirit of rebellion Kintargo might have."

“Now more than ever we need that spirit of rebellion to stay strong, but Thrune’s actions have driven into hiding those who would stay strong and resist. Those who could once rally the city to a cause, such as Lord-Mayor Jilia Bainilus and my parents, are missing at best, and are more likely dead. I cannot do this on my own, but with the aid of talented citizens such as yourselves, I have hope that we can. Will you aid Kintargo? Will you save the city from the devil?”

After some convincing, and a small payment, the player characters agree to help and explore the Fair Fortune Livery with him. He passed them the last note his mother gave to him and most of his mother’s coffer.

We meet and decided to play Hell’s Rebels.

Currently the players and characters so far are as follows.
David as a half-elf unchained rogue,
Brandon as a human sword and board fighter,
Bryce as a Human Cleric of Milani.

• Level: 1
• Stats: (roll 4d6 drop lowest) six times, place in any order.
• HP: max first level
• Wealth: average starting gold as per class
• Races: Core plus Aquatic Elf, Strix, Tengu, and Tiefling.
• Classes: any paizo
• Traits: Hell’s Rebels Campaign Trait + one other
• Drawback: you may take a drawback for an extra trait, however I have the right to veto certin drawback on a per character basis.
• Background: I would like a background, but at least let me know what Campaign trait your taking and your reason for going to the protest.