Vax grew up in the home of a minor noble house, the child of servant parents. His mother worked in the kitchens and his father tended the grounds. They were happy and content- as close to members of the family as servants could be.

The same age as the family’s only son, Vax was brought up to be his playmate. He had the same advantages as far as schooling but he was definitely made to feel his place. He wore the son’s castoff clothes, played with his broken toys, and ate his leftover meals.

Always getting second best, he grew to resent the master’s son and resorted to petty thievery, stealing little things around the house to make himself feel better. One day he went a little bit too far and stole a present from the giant horde of Name Day presents the master’s son had received. What he didn’t realize was he had stolen a signet ring that had been in the family for generations and the master had been waiting years to present it to his son.

Vax’s family was forced to leave the house. His parents took any and every menial job they could find in order to make ends meet. Unfortunately his father was killed in an industrial accident a couple of months after they left the noble’s home at a factory. The wealthy owners had skimped on any and all safety measures and it led directly to his father’s death.

Vax and his mother continued to soldier on as best they could for another couple of years. Until the day she died of a plague that was inflicting the lower-class sections of the city. That left Vax all alone feeling incredible guilt. If it wasn’t for his actions his parents would still be alive.

The night Vax buried his mother’s body he went back to the master’s home. Originally he was going to kill everyone inside. He snuck in through a window while everyone was sleeping and crept through the house. Making his way silently into the son’s bedroom he looked down on him, fast asleep and realized he just couldn’t do it. Something just wouldn’t allow him to kill the young man.

But he did see that hated signet ring. He slowly eased it off the son’s finger and crept back unnoticed into the night. He stopped just long enough to let all the animals out of the barn and then set it on fire.

Now he prowls the streets of Kintargo stealing anything he can get his hands on. He has incredible guilt for the actions that brought him to where he is. He’s incredibly intelligent but he’s filled with class-rage and tends to lash out at his “betters” whenever and wherever he possibly can. His terrible temper tends to get him into trouble and most people think he’s a bit of an idiot because of it.

He’s quick to avenge slights both real and imagined. He has a bit of a persecution complex. Any slight can set him off and because of his “hot-headedness” there are a lot of perceived slights out there for him to avenge. Luckily the new government has become something of a focus.

At the end of the day Vax isn’t a bad person. He wants to do good things. He wants to be a good person.He just doesn’t know how and he feels insurmountable guilt for his childhood actions and is almost crippled by incredible psychic pain. Pain so deep, so overwhelming that he can’t help but be on the defensive all the time. He follows the evil god Norgorber because he believes that’s the god he’s supposed to and deserves to follow.

He’s a loner, terrified to let anyone get close. He honestly thinks he’s cursed and that anyone who gets too close to him will end up cursed too. So he puts up a wall of greed and apathy to keep everyone at arm’s length. 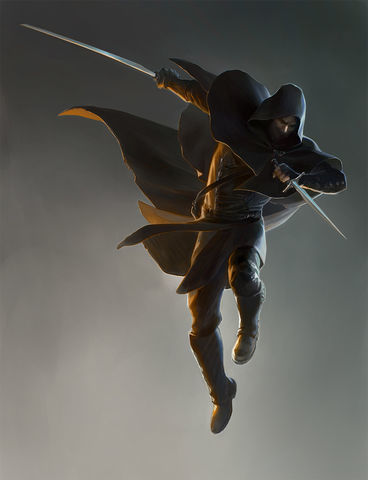